ICAR-National Research Centre on Mithun (ICAR-NRCM), Medziphema, Nagaland celebrated its 33rd Foundation Day on June 2nd through video conferencing. ICAR-NRCM is the only research institute that exclusively works on the Mithun.

Shri. Temjen Imna Along, Hon’ble Minister of Higher Education & Tribal Affairs, Govt. of Nagaland has also attended the program as the Special Invitee via video conferencing. He virtually inaugurated the newly constructed building of the Central Instrument Facility and Mithun Museum at the ICAR-NRC Mithun office. While delivering the speech, the Hon’ble Minister of Higher Education & Tribal Affairs, Govt. of Nagaland Minister complimented ICAR-NRCM Scientists for their achievements in research and extension activities. He lauded the efforts of the institute for creating awareness on semi-intensive Mithun farming by promotional video. He also highlighted the importance of ICAR-NRCM in inspiring the Mithun farmers as it provides livelihood security and is considered an auspicious & spiritual animal. He was proud that he is a “Mithun farmer” and encouraged other farmers to take up Mithun farming. He pointed out that the Nagaland forest ecosystem is ideal for the natural habitat of mithun and with proper guidance, we can surpass the Arunachal Pradesh in Mithun population. He thanked the institute for providing livelihood opportunities to rural people. He in his final remarks urged the youths to take up entrepreneurship in Mithun and other livestock to stop migration.

The program was chaired by the Deputy Director General (Animal Science), ICAR, New Delhi,   Dr. Bhupendra Nath Tripathi via video conferencing. He emphasized the contribution of ICAR-NRCM towards 30 % increase in the Mithun population over the previous census. He praised the hard work of the entire ICAR-NRCM for the development of technologies benefitting farmers. He underlined the fact that Mithun production being organic has a remarkable ability to thrive in forests without being getting infected with a wide range of pathogens and parasites. He highlighted the importance of preventing the incidence of FMD and measures should to taken to curtail transboundary diseases. He urged to evolve technology for vaccinating & deworming the free-range mithuns and take up research on rumen microbiome, improving germplasm, and multiplying the same through assisted reproductive technology. He further suggested collaborating with ICAR-IGFRI for fodder development. He pointed out the health benefits of

mithun milk and emphasized the popularization by branding the milk. He said the institute should play a role in increasing the population of mithun by extension services.

The Guest of Honour, Dr. Amrish Kumar Tyagi, Assistant Director General (Animal Nutrition & Physiology), ICAR, New Delhi while delivering his speech highlighted the commercial potential of mithun milk and meat in the fields of functional foods and nutraceuticals. Further, he stressed the nutrient profiling of milk and meat. He urged to take up research on rumen microbiome in comparison with other livestock and utilize local tree leaves and dry fodder for preparation of low-cost feed block to benefit farmers.

Dr. Abhijit Mitra, Director, ICAR-CIRC, Meerut, UP, and also the Guest of Honour pointed out the role of mithun as a meat animal in Northeastern States. He strongly emphasized the scope of mithun as organic, functional, and alternative food. He further deliberated how mithun farming can be bankable taking the interest of stakeholders and financing agencies. He urged all the farmers to stop the indiscriminate slaughter of well-built large size mithuns and should be kept for breeding. He further appealed to the youths to explore entrepreneurial opportunities in Mithun farming.

Dr. M. H. Khan, Director of ICAR-NRCM, welcomed all the dignitaries and highlighted the significant achievements of the institute. On this occasion, the Directors of several ICAR Institutes across India, Directors of State Animal Husbandry & Veterinary Department, Govt.  of Arunachal Pradesh, Manipur, Mizoram, and Nagaland, Scientists, KVK officials and Progressive Farmers from Nagaland also participated online in the program. 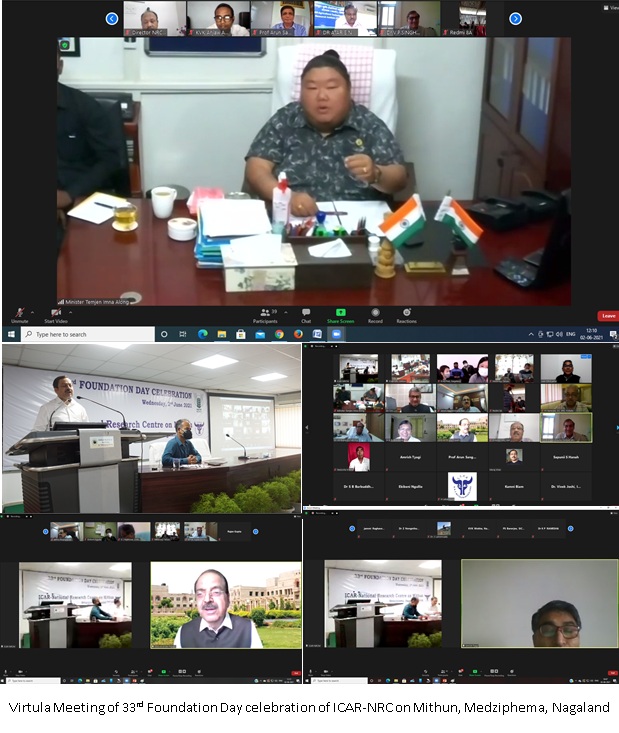