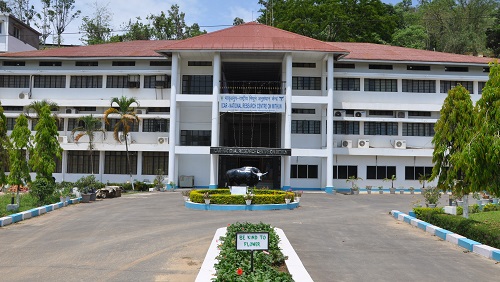 The ICAR-National Research Centre on Mithun was established in June 1988 in the state of Nagaland under the aegis of the Indian Council of Agricultural Research to provide impetus on the research work on Mithun (Bos frontalis). Mithun, a ruminant species belonging to the family Bovidae and assumed to be the domesticated form of wild gaur (Bos gaurus) is indigenous to the eastern Himalayas and referred to as the ‘sacrificial ox’ of the North-Eastern Region of India. It plays an important role in the traditions and rituals of the vast tribal population of this region.

ICAR-NRC on Mithun has been playing key roles in the conservation, breeding and health management of this magnificent species. The scientists of this Institute, in the past 28 years, have generated significant scientific information and developed many farmers’ friendly technologies and a package of practices for making mithun husbandry a sustainable commercial venture.

Mithun is distributed within a limited geographical boundary. It is mainly found in the North-Eastern Region of India viz., Arunachal Pradesh, Nagaland, Manipur and Mizoram. It is also found in Myanmar, China, Bangladesh and Bhutan. It is difficult to ascertain the world total population of mithun as no systematic population record is available in mithun inhabited areas except in India. According to the Livestock Census (2012) of India, out of 298264 total population of mithun in India, 249000 mithuns are available in Arunachal Pradesh, followed by 34871 in Nagaland, 10131 in Manipur and 3287 in Mizoram. Apart from these, a small number of mithuns were also reported from Himachal Pradesh (988) and Jammu & Kashmir (57).

Mithun is traditionally reared under forest ecosystem and can easily thrive at elevations between 300 – 3000 MSL. Several factors including inbreeding, indiscriminate slaughter, cross-breeding with cattle and habitat destruction due to local agricultural practices (Jhum cultivation), are responsible for the poor or slow population growth of mithun. However, considering the social as well as economic importance, this animal deserves special attention for conservation, breeding and propagation.